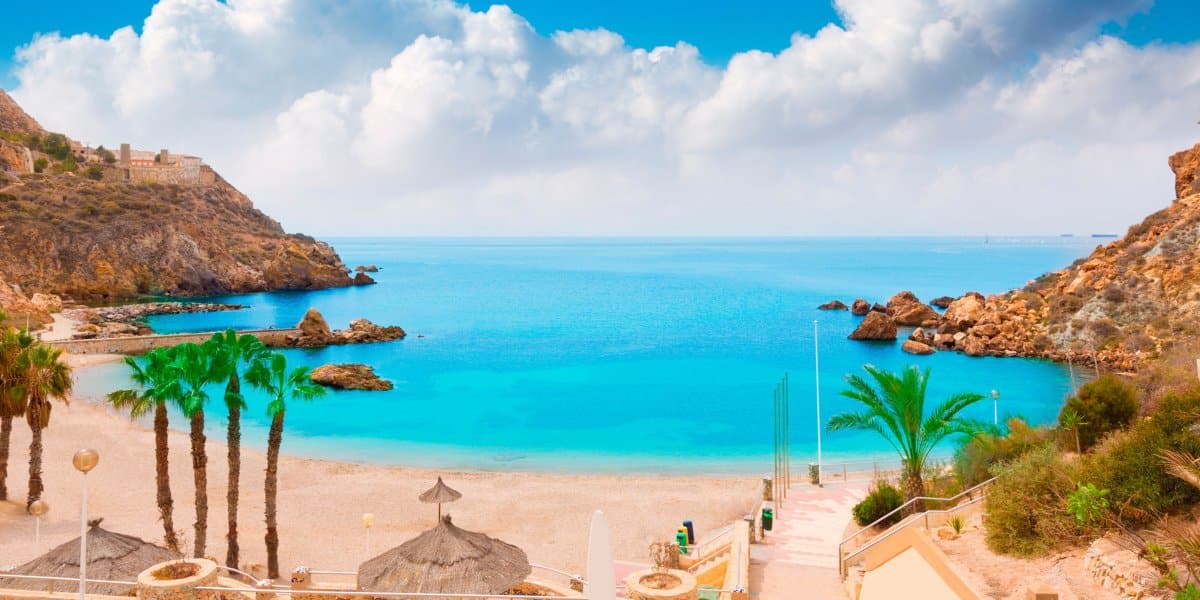 Whenever people hear about Spain, the first thing that usually comes to their minds is the Mediterranean side, but especially the coast of Valencia (Benidorm, Alicante…). There’s, however, a less known area, only 45-minute drive away from Alicante, that offers just as nice a weather, beaches and many other things which get less attention from tourists just because they have barely been discovered by them. I’m talking about Murcia.

Here at Las Delicias, we get many of our products from Murcia, which just shows an example of the richness of that region of Spain. Not

in vain is Murcia known as ‘Europe’s Orchard’. Food is only one of the reasons you should definitely visit that part of Spain. There you’ve got beautiful sandy beaches (La Manga, Cartagena, Mazarrón or Águilas); a stunning countryside with rice fields, caves, canyons and mountain ranges (Moratalla, Calasparra…); plains similar to those from La Mancha, vineyards and a thermal spring spa (Jumilla, Yecla, Fortuna…). Also the forests of the Sierra Espuña Regional Park and the surrounding areas, full of medieval castles (Mula, Aledo, Alhama…). Or you can enjoy different outdoor sports like rafting in the river Segura or hiking and then relax in the healing waters of the spa baths of Archena (Ricote Valley). And if you are more interested in traditional old villages or cities full of history, you also have plenty options like Águilas, Caravaca de la Cruz, Cartagena, Cehegín, Lorca or the capital itself: the city of Murcia.

Just in the city of Murcia you already have many things to do, so you won’t get bored: from the old town with its narrow streets, the stunning cathedral and the beautiful casino to the archaeology and art museums, the theatre, churches, monasteries and palaces and the river Segura, which goes right across the city between long walkways and bridges. Also, just a few minutes car drive, you have the pine-covered hills that surround the city, where you can find a sanctuary and a regional park.

Murcia is a nice city all year round, but if you aren’t used to high temperatures, you might want to skip visiting it during the summer, when it can get as high as 48 degrees Celsius. In the summer months, you’d be better off going to the beaches of Murcia or to the highest grounds of the north or the inside, where temperatures are cooler.

Good times of the year to visit the city of Murcia are the last weeks of March and the first week of April, during the festivities of the Semana Santa (Holy Week), with processions of life-sized religious sculptures that are carried around the city amid candles and flowers. At the end of the Holy Week starts another festival, the Fiestas de Primavera (Spring fest) with the Bando de la Huerta (Orchard parade) when locals dress up in traditional clothing and, to mark the end of the festivities, the Entierro de la Sardina (Burial of the Sardine) parade.

In May you can enjoy the Three Cultures International Festival which celebrates the cohabitation of the Peninsula by Christians, Jews and Muslims through music events and exhibitions.

In September you have the Feria de Murcia, during which you can enjoy a big fun fair, the parades of the Moros y Cristianos (Moors and Christians) and traditional food stalls. Christmas is also a good time to visit Murcia, but don’t forget to wrap up because it can
also get cold there!

Last but not least, here is a sample of products from Murcia that you can find in our store: Spanish gazpacho from Alhama, Hero jams and baby food from Alcantarilla, Licor 43 from Cartagena, Wheat semolina for ‘migas’ from Lorca… but I’m sure I’m forgetting many, many more as a great part of our products come from there!

Katie Georgeson has been the brand manager at kitchen appliance manufacturer Stoves for 3 years, looking after PR, events and tradeshows. Stoves, which is part of the Glen Dimplex group, has been at the forefront of engineering and innovation for nearly 100 years. The brand specialises in high-quality cooking appliances that are engineered for food and are the ultimate addition to your kitchen with true cooking features.