The Paella Recipe (by Omar Allibhoy) 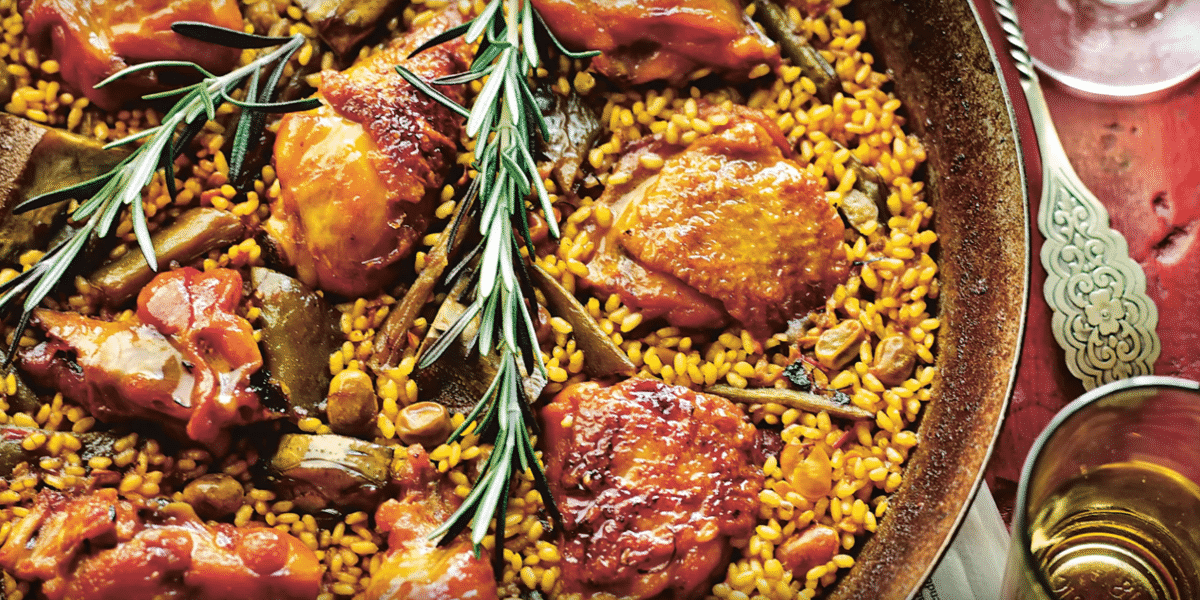 Paella is one of the most famous dishes in Spain. It brings friends and family together, and it is present in most festive occasions, as Sunday roast dinner is present in the UK. Its origin is in Valencia, and Valencians are proud to preserve the authentic and only paella recipe. No festival in Valencia can miss an enormous paella pan that can feed to dozens of people.

I would not dare to give you a paella recipe. There are many, they differ from region to region, and there are many rice dishes that are called paella but that are not even close to the traditional recipe. So this time I´m borrowing a recipe to the chef Omar Allibhoy, that it is published along with many other sensational classic and modern recipes on his cookbook Tapas Revolution.

This time I´m not going to tell you how to make the recipe. As Omar Allibhoy knows better, I will let him do all the talking in this fantastic video that I found in Jamie Oliver´s Food Tube.

If you are still with me, you might have some thoughts about the traditional recipe.

You might not eat rabbit. Obviously, if you don´t eat any meat, this recipe is not for you, but some meat eater would find themselves a bit uncomfortable with the idea of eating chicken. In that case, you can swap the chicken with 400g of pork pieces (bone in). Don´t swap it with beef or lamb.

Finding some ingredients could be hard, especially the beans. I would not dare to go against Omar´s teaching (because he is a proper chef who worked at El Bulli and I just do my best to cook at home) but the beans on the paella are not broad beans but a bean called garrofón, that can only be found in Valencia. Butter beans are close enough, but they are difficult to find fresh. At Las Delicias you can find precooked Butter Beans that would be acceptable. Fresh artichokes are also a bit tricky to find in the UK, but we have them tinned and precooked artichokes. If you decide to use precooked beans and artichokes, add them to the stock at the same time than the rice, so they don’t cook for a very long time.

Instead of calasparra or bomba rice, you can also use redondo rice and it will be absolutely fine (despite bomba or calasparra rice are superior in taste).

Where is the chorizo in this recipe? The traditional paella recipe in the XX century does not include chorizo. But in the XXI century, Jamie Oliver dared to say that paella would benefit from the addition of chorizo, which caused the rage in many Spanish paella lovers – because it is true that Spaniards are very passionate and we can’t just be a bit upset. But some food researchers found that chorizo belonged in the traditional paella recipe during the XIX century.

At the end of the day, you are the one who is going to eat the paella, which in my opinion entitles you to cook the dish in your own way and change anything you want. However, my recommendation is that you start with this traditional recipe and see if you like it. If you can’t cook it exactly as it is, there are some basic changes that will not take you very far from it (as swapping rabbit with pork or using precooked beans and artichokes if you can’t find them fresh), and once you have tried it, if you think some changes would work better for you, you can start experimenting. Here are some dos and don’ts that many Spaniards use at home:

Pablo is one of the founders of Las Delicias. He is the manager, the bookkeeper, the web designer, the cleaner, the marketer, the new products researcher, the sales assistant… What he loves the most of his job is that he actually needs to taste hundreds of products in order to find the most delicious ones.